In the modern laying hen industry, the degree of intensification and competitive pressure is increasing. Particularly, environmental changes, unstable formulation materials, frequent disease, etc. will bring sustained physiological and pathological burden to the hens. Therefore, the liver is always in an overloaded state, causing bile acid secretion to not meet the normal needs of the body. 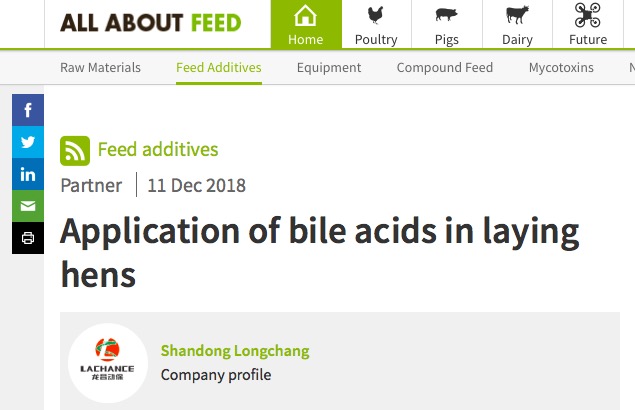 As producers continue to pursue production efficiency, the body pressure on laying hens is increasing, and the burden on the liver which is the ‘biggest processing plant’ in the body is undoubtedly huge. Damage to the liver and gallbladder of laying hens from 38 weeks of age until elimination period is very common; the incidence rate is 60-90%, of which 50-70% of the mortality is caused by fatty liver.

Fatty liver of laying hens, also known as fatty liver syndrome, is a nutritional metabolic disease which is commonly found in laying hens, especially in breeding after 38 weeks. It is mainly due to fat imbalance in liver deposition and extrahepatic transport. Firstly, anatomy will reveal a large amount of fat deposition in the abdominal cavity, especially in the abdomen, muscle and glandular stomach. Secondly, the liver is swollen, bleeding, crisp and greasy, and is easy to rupture (see Image below).

Causes of fatty liver in hens

The main causes of fatty liver in laying hens are:

Bile acids can stimulate the liver to produce a large amount of thin bile to discharge mycotoxins, drug toxins, metabolic toxins and other toxins from the liver through bile. In addition, bile acids can also effectively decompose or combine with endotoxins, relieve liver burden, and keep the liver in optimal work status.

More than 95% of eggshell components are calcium carbonate. The absorption, deposition and excretion of calcium are regulated by vitamin D3 and its metabolites. D3 is a fat-soluble vitamin, so if the fat-soluble vitamin is not well absorbed, the quality of the eggshell will be seriously affected. Bile acids can effectively increase the absorption of fat and fat-soluble vitamins by emulsifying, activating lipase and carrying fatty acids to prevent poor eggshell calcification.

Trial 1: 6,000 Roman layers at 245 days old were randomly divided into control group and experimental group, with 3 replicates in each group and 1000 layers in each replicate. The control group was fed a basic diet, and the experimental group was supplemented with 60 ppm bile acids. The pre-trial period was 7 days and the trial period was 30 days.

It can be seen from Table 1 that compared with the control group, the egg production rate of the trial group was significantly increased, and the egg feed ratio and the mortality rate were significantly decreased. 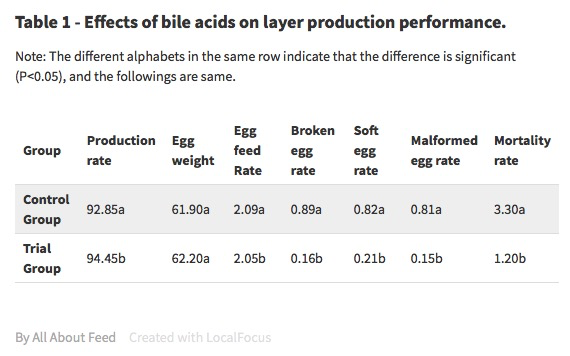 It can be seen from Table 2 that compared with the control group, the addition of bile acids in the diet significantly improved the egg yolk colour, eggshell hardness and eggshell colour at the 6th week and the 12th week. 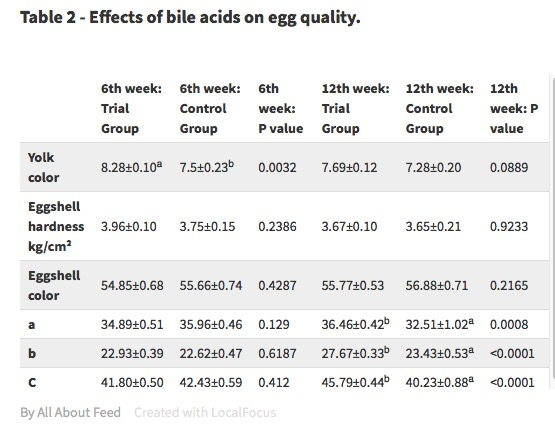 Relieving the burden on the liver

In summary, the addition of bile acids in layer feeds can effectively relieve the burden on the liver, improve the utilisation of fat-soluble vitamins and calcium with better performance of layers and better quality of eggshells to bring considerable economic benefits to the layer farming industry.