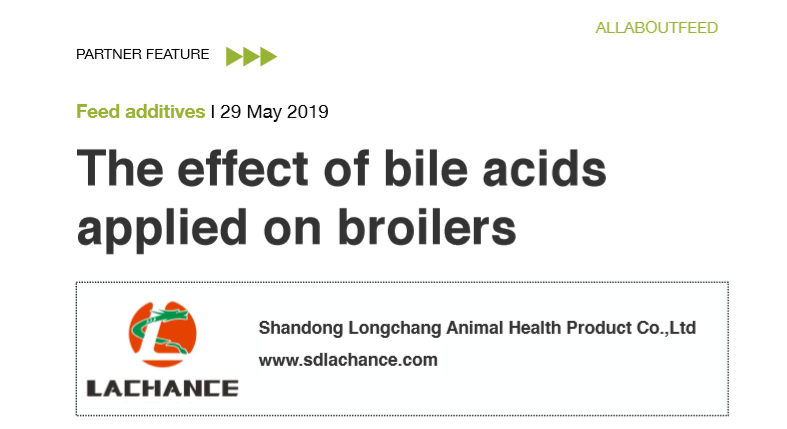 Bile acids are synthesized by the liver and are the main components of bile. As an endogenous substance that can be secreted by animal itself, bile acids play an important role in the digestion and absorption of oil and the detoxification of liver.

As far as the current breeding situation is concerned, it is inevitable that the broilers will face problems such as stress, mycotoxin and over-nutrition during the feeding process. The liver is the largest digestive gland, detoxification organ of the body, so it is especially important to protect the health of the liver.

In many large broiler and laying hen farms, bile acids have been recognized for the role in protecting the liver and gallbladder, improved feed utilization, improving the FCR, removing toxins, and relieving stress. The broiler integrated enterprises involve in the production process of feed production, hatching, broiler breeding, slaughtering and processing, etc., from hatching of chicks to final meat sales, so they need more attention to the improvement of details. Especially under the needs of antibiotic-free, the methods to raise healthy chickens and produce safe meat are the concerns of the enterprises.

1.The Effects of Bile Acids on Broiler Breeders

In the brood breeding stage, the broiler breeder farming will aim at uniform development and simultaneous sexual maturity. In the egg laying stage, the broiler breeder will produce qualified fertilized eggs to ensure the quality and hatching rate of the chicks. With the continuous improvement of varieties and breeding methods as well as feeding management level, although the production index of broiler breeders seems to reach a peak, we still face the problem of high egg production rate and high mortality rate.

After continuously adding bile acids on the broiler breeder feed for a period of time, it can be seen from the data in Table 1 that the number of daily deaths decreased significantly; the egg production rate maintained smoothly; the rate of egg cracking decreased; the fertility rate, hatching rate and healthy chicks increased; the egg weight increased. It is indicated that bile acids have positive effects on laying performance and hatching index of broiler breeders.

When broiler breeders have a high rate of death, first we need to consider whether there is a problem with the liver. Hepatobiliary syndrome caused by accumulation of toxins and fatty liver caused by nutritional imbalance are major problems that are easily neglected. Because poor quality of feed ingredients, over-nutrition, stress, disease and other factors, the liver functions of livestock and poultry are excessively consumed. As an endogenous substance secreted by the liver, after bile acids added to the broiler breeder, the mortality rate and the quality of the egg are obviously improved. On one hand, bile acids can effectively promote the digestion and absorption of fat and fat-soluble vitamins after entering the intestine. On the other hand, bile acids stimulate the liver to produce more thin bile and promote the elimination of toxins. In addition, the liver is the only organ that synthesizes albumin in chickens, so it determines the albumin content in egg white. The anabolism of cholesterol in egg yolk is closely related to the liver, therefore, only the healthy liver can guarantee the egg quality. Bile acids can also increase the activity of thyroid hormone, which can effectively prevent excessive deposition of abdominal fat in the late growth period of the laying hens, thereby prolonging the egg production cycle and improving egg production performance.

In the early stage of broiler breeding, the development of liver and gallbladder functions in chicks is not perfect. The high protein and high fat in the diet exceeds the ability of digestion and absorption, which is easy to cause nutritional diarrhea and feed feces due to indigestion. In the later stage of breeding, due to factors such as accumulation of toxins and over-nutrition, liver problems were induced, resulting in death of chickens or poor uniformity of flocks.

As an endogenous emulsifier, bile acids can effectively emulsify lipids, expand the contact area between lipids and lipase, enhance lipase activity, stimulate lipase secretion, and greatly improve the digestion and absorption rate of lipids. Bile acids could release feed potential, reduce FCR. A large amount of preliminary data also shows that the addition of bile acids in the feed can increase the utilization rate of oil by 15% to 30%, so it can reduce certain metabolic energy and save feed cost on the basis of the original formula. Bile acids can increase the metabolic rate of fat, and could make full use of fat in feed as energy rather than turning the fat into abdominal fat, thereby increasing the rate of slaughter.

The European Index is a comprehensive measure of broiler culture, reflecting the indicators including body weight, survival rate, FCR, production management, etc. The greater the index, the more breeding benefits. Bile acids can shorten culture time 2 to 3 days under the same weight, and significantly increase the European index.

For the broiler integrated enterprises, bile acids play an important role in the whole feeding process from the broiler breeder to the end of broiler life cycle by effectively improving the egg production performance, hatching index and the broiler growth performance. In the non-antibiotic environment, with less or no drugs, only the healthy liver can guarantee the healthy chickens for more economic benefits.